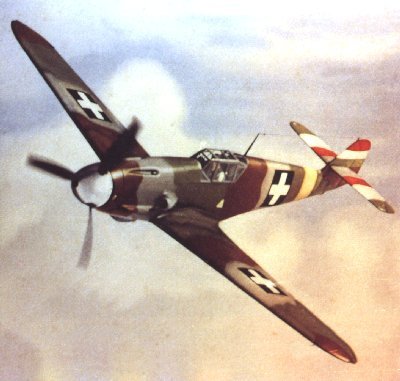 Spanish Nationalist Air Forces and the Legion Condor
Not really an ally or co-belligerent of Germany, but an important part of Luftwaffe history, 1936-39. The white Andreas Cross being used mainly for wing surfaces, the fuselage most often having clear solid roundels, but many aircraft piloted by Luftwaffe personnel sported either unit or personal markings inside the fuselage roundel. The fuselage roundel was also smaller then the wing roundels.

The Spanish Blue Squadron (Eastern Front).
Although officially neutral, Fascist Spain still tried to help her former ally Germany in her fight against the Communist Soviet Union. Named after their blue shirts, these volunteer units were known as the "Blue Division". "Blue Squadron" (altogether four, but never more then one at a time), fought as a Staffel in Jagdgeschwader 51. The Falangist Party "yoke and arrows" symbol together with the respective Staffel badges, were the only markings that differed from the standard Luftwaffe markings and color scheme. In addition some a/c wore the name of a fallen comrade on the port side of the cowling.

Italian Air Force (until Sept. 1943)
Note that the roundels were only used on the wings, the fuselage was marked with a white band. The rudder was marked with a large white cross, often, but not always, adorned with the House of Savoy Crest. The wing markings were either only black stencils, or with a white background, depending on the scheme and period. The national insignia was based on the fasces, an Axe strengthened by a bundle of sticks - a Roman symbol of power and government, adapted by the Italian fascists and the source of their name.

Air Force of the Nationalist Republic of Italy (end of 1943-1945)
The RSI AF used a simplified version of the pre-armistice insignia, based on the same fasces theme. Similar to the previous Italian wing markings these were often just black stencils, but the original insignia was painted in black, with a white background, but like the Luftwaffe, the white was mostly left out for camouflage purposes.

Royal Bulgarian Air Force
The pre war markings were very complicated, compared to this very basic marking. Early in the war, the rudder was adorned with the Bulgarian tri-color (from top to bottom White-Green-Red), but this practice was often discontinued as the war progressed.

Royal Hungarian Air Force
Again a more simplified marking replacing a pre-war design. Often the whole fin, rudder and vertical tail surfaces were covered by the Hungarian tri-color. Later in the war the white was often greyed-out and the tail markings either left out or replaced by a smaller version.

Croatian units attached to Luftwaffe
Although not officially an independent Air Force the Croats enjoyed some autonomy. They used a modified Balkenkreuz based on a leave and the fin was adorned with the Croatian Red/White checkerboard Crest combined with the Ustachi emblem.

Slovak Air Force
A Balkenkreuz type marking in the national colors, consisting of a Blue and White cross, with a Red roundel in the center.

Finnish Air Force
A Swastika in the National colors of Finland. However this marking had nothing to do with Nazi symbolism. Some people might argue that Finland wasn't an ally of Germany, but if you fight (and die) together against a common foe, you're as much an ally as you'll ever be - but to stay neutral in this argument the term co-belligerent preferable. So if we leave the politics out, and focus on the fight against the Soviet Union, then by all means this is a correct point of view.

The so-called Von Rosen Cross, named after the Swedish Count Erich von Rosen, had been the Finnish national insignia since 1918 and consisted of a light blue Swastika on a white roundel, the Finnish national colors. During the latter part of the Continuation War of 41-44, the white background was often replaced by RLM 65 Hell Blau, in an effort to make the a/c less conspicuous.

French Vichy Air Force
After the French Armistice, the Vichy Goverment was formed, which in many ways was co-operating with the Germans. Eventually this resulted in some fighting between the Vichy and Allied forces, mostly in Africa and the Middle East, and as such I will treat the Vichy as co-belligerants, though they technically are not. The first post-armistice markings had been the standard French cocarde and tri-color, to which was added a white arrow along the fuselage. From 1941 onward the arrow was replaced by a yellow tail, with or without red stripes, and often a yellow cowling (again, with or without red stripes).