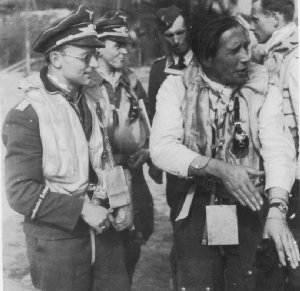 Cuff titles were introduced in 1935 directly after breaking the binding treaty of Versailles, when the Luftwaffe embarked on a policy of rebirth of World War I traditions and to inject pride and enthusiasm into the new air arm.

The cuff titles were worn as commemorative titles, membership titles to denote assignment to certain elite units or groups or as awards to participants in certain campaigns, better classified as sleevebands.

Heroes of the last war, the Nazi Party and later fallen leaders and heroes of the new Luftwaffe itself were the ones to be commemorated with most of these titles.

Jagdgeschwader Richthofen
March 14, 1935
The men of the first Jagdgeschwader of the Luftwaffe named after the famous WW1 Ace Von Richtohofen were ordered to wear this commemorive cuff title. This had its share of designation changes before it received the one we all came to know during WW2, this was mainly due to the organizational system in use during those early years of the Lutfwaffe, first naming units after the nearest (big) town and later bu using a numeral system which again was based on where the unit was located.

Before the special 1917/18 cuff, officers who fought in JG1 "Richthofen" during WW1 were also entitled to wear this cuff, but with aluminum borders.

Sturzkampfgeschwader Immelmann
March 14, 1935
Commemorating WW1 fighter ace Max Immelmann, the "Eagle of Lille", killed in 1916. Its interesting that this honour didn't go to a Jagdgeschwader, but a Stuka Geschwader.

Kampfgeschwader Boelcke
April 3, 1935
This time the name of the great WW1 fighter ace and more important air combat visionary Oswald Boelcke was honoured. Again the name didn't go to a Jagdgeschwader, but a Kampfgeschwader, equally deviding three great names over the three main arms of the Luftwaffe - Fighters, Dive bombers and Level bombers.

Officers who had served in Jagdstaffel 2 "Boelcke", were allowed to wear this title with alluminum borders until the arrival of the special WW1 commemorative band.

Zerstörergeschwader Horst Wessel
March 24, 1936
In honour of an early Nazi martyr and SA member who was killed during street classes with communists. His poem becoming the quasi anthem of the Nazis: "Die Fahne Hoch/Das Horst Wessel Lied".

Kampfgeschwader Hindenburg
April 20, 1936
In honour of General Paul von Hindenburg who crushed the Russians at Tannenberg and later became a Statesman, the last President of the Weimar Republic, appointing Hitler as Chancellor in 1933. He passed away in 1934 clearing the way for Chancellor Hitler to seize power.

Kampfgeschwader General Wever
June 6, 1936
In honour of General Major Walther Wever, first Chief of the Luftwaffe General Staff, although he never held that official title, and was killed in a flying accident May 3, 1936. Wever was perhaps the most capable man to hold his position, held in high esteem, his death was a great loss for the Luftwaffe.

Jagdgeschwader Schlageter
December 8, 1938
Another martyr, Leo Schlageter, charged with sabotage in the French occupied Ruhr, he was executed May 23, 1923. Schlageter wasn't a Nazi himself, but a perfect propagande tool for them to use.

Legion Condor
June 12, 1939
In rememberence of the units who fought in the Spanish Civil War, the following three units were ordered to wear this commemorative band.

Tannenberg
September 5, 1939
In rememberence of the Battle of Tannenberg, East Prussia where the Germans crushed the Russians at the beginning of WW1 in 1914, the men of Aufklärungsgruppe 10 were ordered to wear this commemorative band.

Jagdgeschwader Udet
December 20, 1941
In memory of Generaloberst Ernst Udet, WW1 fighter ace and who as Chief of Supply and Procurement was one of the most influential men in the Luftwaffe until his suicide November 17, 1941. The men of Jagdgeschwader 3, were ordered to wear this commemorative band.

Jagdgeschwader Mölders
December 20, 1941
The first WW2 Luftwaffe hero to be honored with a commemoration band, the great fighter ace and influential tactician, Werner Mölders, who held the position of General der Jagdflieger when he was killed in a flying accident. Ironically he was on his way to Udet's funeral when against the advice of the pilot of his transport he demanded to continue his journey despite the worsening weather condition. The men of Jagdgeschwader 51, once led by Mölders, where ordered to where this commemorative band.

Jagdgeschwader Richthofen Nr.1
October 29, 1935
This cuff was a "Kriegserunnerungsband", to be worn by original members of the WW1 unit that was commemorated. In this case Jagdgeschwader 1 "Richthofen", replacing the earlier type cuff for these men. Permission to wear this order was to be granted, and depended on certain qualifications.

If serving with a unit which had its own cuff title, this took precendent over any WW1 commemorative band.

Führer-hauptquartier
Late 1939
To be worn by all military personnel stationed at the Hitler's personal Headquarters.