All Luftwaffe units with the exception of Jagd and Schlacht Geschwader and Gruppen, employed a four digit/letter code system. The Jagdgeschwader units used a coding system more suited to their style of combat where quick air to air identification was required. Stab aircraft were identified by fairly large symbols, normally being positioned forward of the fuselage cross, or Balkenkreuz. These symbols were usually painted black and outlined in white, although black outline or solid white symbols were sometimes used. These markings were fairly standardized but did have variations and individual adaptations in actual use. 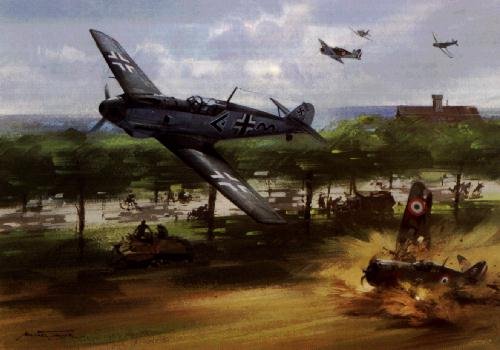 The Gruppen Stab symbols were generally similar to the Geschwader Stab symbols but were distinguished by not having the horizontal and vertical bars following the chevron.

The ordinary Staffel machines were identified by a colored number, the number identifying the individual aircraft, and the color representing which Staffel the aircraft was assigned to. The official directive that authorized this system specified that the code number of the aircraft should be placed forward of the fuselage cross, coupled with the Gruppe identification symbol painted on aft of the fuselage cross.

Red 7 is either 5th or 6th Staffel, depending on the number of Staffels in each Gruppe
(but also 8th!)

The following are listings of the colors assigned to each Staffel, which when used in conjunction with the Gruppe symbol, would identify the Gruppe, Staffel within the Gruppe, and the individual aircraft. However there were many exceptions to the rule. For instance, when a fourth Staffel was added to many of the Jagdgeschwader after August of 1944, various colors were used to identify this Staffel, the most common being blue but also including red and green. The Staffel colors painted on the aircraft would often depend on what paint was available and on the interpretation of color shades by the painter.

Staffel color assignment when there were three Staffeln composing a Gruppe

Staffel color assignment when there were four Staffeln composing a Gruppe