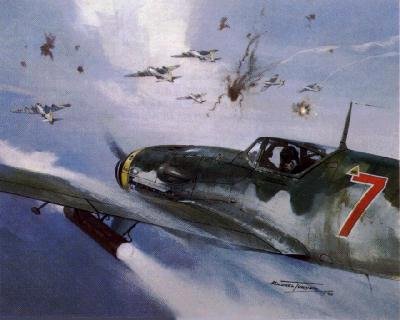 These special markings stemmed from the need for quick air to air identification between Luftwaffe units and Allied fighter escorts. From mid 1943 an increasing number of German fighters were needed to stop the US strategic bombing offensive. Up until that time, apart from a few units with distinctive or unusual paint schemes, the only way to identify an individual aircraft was by the Staffel, Gruppe and/or Geschwader badge. This was not a very effective means of identification in flight because of the normal small size of the badges, let alone during combat when quick identification can mean the difference between life and death. This method might be further complicated due to the fact that transferred aircraft might have multiple badges, and many aircraft had individual personal badges or markings.

The first attempt to mark day fighter aircraft that were primarily engaged in defending the Reich from allied bomber attacks, was to paint all or part of the vertical tail surface in white, note it says primarily because there were units using these methods outside the Reich, notably JG 27 in the Mediterranean, which was also dealing with heavy bomber attacks, more details later.  This method did not differentiate between individual units. This system lasted only a short time.

Another similar marking system used to identify Luftwaffe fighters was to paint the spinners black with a white spiral. This method lasted until the end of the war, but it is uncertain if there was an official standard on this as spiral bandwidth, number of band segments, and even the spinner and band colors are documented in numerous variations. This is not the same as an official RVT marking, its use was a common in the Luftwaffe and on all fronts.

A special mention deserves I./JG 1 which used a variety of colorful identification schemes, either checkerboards or black and white striped engine cowlings on their Fw190As. The checkerboards were divided into black-white, black-red and black-yellow for the 1. 2. and 3. Staffel respectively (the same system was applied to the spinners of the striped version of this scheme). The lines survived longer then the checkerboards because during an attack on October 8 1943 made by US P-47s of the 78th. FG on the home field of I./JG 1 it was proven to be too hard for the FLAK units to distinguish the Fw190As from the Thunderbolts, which had a checkerboard marking of their own.

As early as January, 1944, JG 1, JG 3 and JG 27 started using distinctive single color fuselage bands to identify aircraft from their respective Geschwader. Other units like JG 11, JG 300 and JG 301 followed the lead of the initial three Geschwader. However, use of these single color fuselage bands was not continuous and declined or was abandoned during the summer of 1944. The predominant color used seems to be red or rust red and brown.

The single engined fighter units weren't the only ones heavily involved with the Reichsverteidigung, but also the two engined heavy fighter units known as Zerstörer, were in the heat of the battle, they were even the most effective anti-bomber units until the Allies were able to escort the bombers deep into Germany. Both white and yellow fuselage bands have been identified, E.Gr. KG 51 (J.) having been identified with distinct red-yellow RVT bands.

When the fighter units defending the Reich were reorganized in October, 1944, the use of the fuselage band increased. Because of the limited number of basic colors , a two-color and three-color bands were soon needed in order to have a distinctive and unique color combination for all the various Geschwader. JG300 and JG301 switched from the solid color rust red to the more distinctive blue-white-blue and yellow red combinations more commonly associated with these units.

This is the generally accepted assignment of band colors (as ordered 20-2-45). However not all the units have been verified as using these bands!

There's no 100% certainty regarding these "checkerboard" schemes. According to some analysts KG (J) 54 should be Green/White, but there might be contrary evidence that this was used by an unidentified ISS, or Industry Protection Squadron. Thanks to Dave Wadman of Experten Decals for his expert help on this subject.

The total bandwidth 900mm, with two-color bands each being 450mm wide, and three-color bands each being 300mm wide. It should be pointed out however, that as was normal practice with Luftwaffe markings, many units had their own individual variations and modifications to widths and the locations of the bands.

During the spring of 1945 several units began applying color bands around the cowling just behind the spinner. The nose band did not replace the fuselage bands, although they did on some aircraft. The colors used were Yellow, Green, Red, White and Black. There might be evidence that this was an identification element of units based in southern Germany.

The color band on the cowling just behind the spinner was applied in many different ways, which often varied and there seems to have been little consistency in its use. The lack of official documentation makes it difficult to find hard evidence other then photographs. The following noses seem to have been the main variations in size and position compared to the previous set. (new art in construction)

Finally, during the final weeks of the war fuselage color bands were discontinued and painted over as the situation became progressively worse. One unit however did exactly the opposite, JV44's airfield protection unit, which flew brightly marked Fw190Ds during those last few weeks of the European conflict. There's has been a lively discussion going on about this unit's exact name and the colors used. It is also fair to say that for a unit with such a small number of aircraft, short operational career and narrow function its importance has somewhat been blown out of proportions. The general accepted color scheme for JV 44 SS was a red underside with white stripes, but there might be proof that black-white and blue-white could have been used as well. Experten Decals has provided some of the best reference material regarding this subject, examining three aircraft in detail of which one has a black (or possibly blue) underside.

These Reichsverteidigungs markings should not be confused with other theater and tactical markings. On the other hand it will often be confusing, as many standard non-RVT markings will be mixed with other tactical markings, either standard or theater of operations related. The following are two typical Luftwaffe tactical fighter markings that could be seen over many fronts and over a long period, especially the "Yellow Nose". Although the "Yellow Nose" varied from complete yellow when it was first applied to underside cowling only, which remained a standard unit the final months, it was never a sign of an elite or crack unit, the "Yellow Nose Bastards" are a myth. The "Yellow Nose" can be found on any front or any time between autumn 1940 and 1945.

The white spinner and forward cowling combined with the white fuselage band are the standard tactical markings for the North African and early Italian campaigns. Sometimes these are combined with white wing tips on the lower wing surfaces. These markings were originally used by the Italian Air Force and subsequently taken over by the Luftwaffe in that theatre of operations. But again, there are always variations and its certainly not rare to find a/c with mixed markings, often a sign of having served in more then one theatre.

A white tail in itself does not say that the fighter in question has an early RVT marking, fighters operating from Italy and Greece also sported a white rudder combined with the white fuselage band of the MTO.

The US 8th. AF also used very distinct color markings to identify their Fighter Groups, for more information about these markings and the Fighter Groups of the 8th. AF check The Mighty Eighth Fightin' Colors.

My special thanks go to Tom Tullis for helping me with his line art.